The Nature Park was named after the biggest island of the archipelago, Lastovo, which is also the southernmost inhabited island in Croatia. The Archipelago consists of the western islets and the island of Sušac, together with islet groups of Donji škoji (Lastovnjaci) and Gornji škoji (Vrhovnjaci) – in total, 44 islands, islets and sea rocks. Nature park Lastovo islands is a true paradise oasis of the Mediterranean. The loneliness and distance of Lastovo did a lot of good to the island. In biological terms, it is one of the best-preserved areas of the Mediterranean. The World Wildlife Fund (WWF) declared the island an area of special importance for biodiversity conservation in the Mediterranean. Two plant species – holm oak (Quercus ilex) and Aleppo pine (Pinus halepensis) – dominate the thick island forests. The abundance of sunlight and night moisture on Lastovo enable life for over 800 plant species, including twenty endemic ones. There are also fifty endangered plant species, and twenty strikingly beautiful orchid species. The best-known cave of Lastovo is Rača, with traces of life and human presence since ancient history. The cave of Medjedina is also significant – not so long ago, the Mediterranean monk seal (Monachus monachus) used to live in it. The caves of Lastovo are home to at least 16 bat species. Seventy percent of the Park’s surface consists of the sea. The submarine world is known for the beauty of various corals. Particularly beautiful are the colonies of gold coral (Gerardia savaglia), red coral (Corallium rubrum), and the endemic star coral (Madracis pharensis). The sea of Lastovo is home to approximately 150 fish species, and the fishermen are particularly happy when they catch the precious lobster. The submarine world of the Park is also rich in sponges, molluscs, moss animals, echinoderms, crustaceans and many other species, making the links of the submarine chain of life very strong. 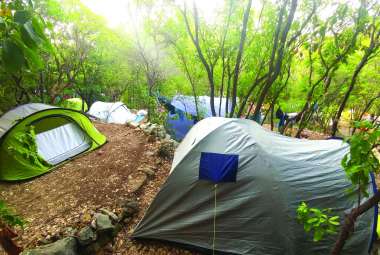