Northern Velebit National Park, the youngest National Park in Croatia, is simply yet another pearl in the necklace of Velebit. Known for a long time, but still not fully discovered. The area of Northern Velebit is a true mosaic created out of the most diverse habitats, constituting home to many plant, fungus and animal species. It is precisely this diversity of karst forms, life and landscapes that led to the establishment of the Northern Velebit National Park. The entire area of the National Park is a spectacle of diversity. Forests, grasslands, rocks, talus cones, water habitats... the boundaries of these phenomena are not strict; instead, they merge into one another. Due to this diversity, Northern Velebit National Park, while small, is nevertheless an important part of the ecological network, as a conservation area important for as many as ten plant and animal species, and eight various types of habitats – grasslands, forests and rocks. However, the key character and values of the National Park are hidden from most visitors, underneath their legs. We are referring to a unique and special world of subterranean karst forms, with pits being the most extraordinary phenomenon. The area of Alan is located in the southern part of the Park. It is a place of mountain grasslands, dolines and cascades with mountain peaks above. The view from Alan towards the sea and the islands is bound to remain engraved in the memory of every visitor. Throughout its history, Velebit has not been merely an empty space without vibrations of everyday human life. Just like the previous inhabitants of Velebit were once attracted to this green part of Velebit crisscrossed by creeks, today the valley attracts visitors as one of their favorite destinations. 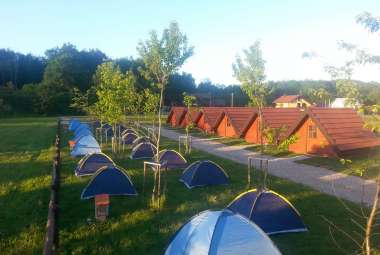